This is a reposting of the Musique Machine Review 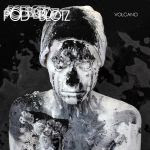 This new LP from Nihilist Recordings features the pairing of sonic oddities, Pod Blotz and Auk Theater. Pod Blotz is the solo project of multi-media artist and photographer Suzy Poling. Auk Theater is the brainchild of longtime experimentalist and professional entomologist, Irene Moon. I will be upfront in admitting from the outset that I have a penchant for weird split records. The stranger the pairing, the better (at least in my mind). Of course, I’ve been burned before by artist pairings that sound good on paper, but in actuality were a pretty terrible idea. With both hope and trepidation I proceed.
On side A, titled Volcano,  LA artist sound and visual artist Pod Blotz offers 5 eerie synth driven compositions with fittingly haunting vocals. Stylistically, the tracks that make up Volcano hold a certain kinship with bands like Prince Rama and Pocahaunted, however with aggressive synth pulses and static flourishes. Dare I say industrial sounding at times. Add to the mix some chilling Moog organ and you’ve got a real creepshow on your hands.
Auk Theater offers a single 22 minute track for their side, however broken up into several digestible “phases” as is announced before each new section of sound commences. On this recording, founder Irene Moon is joined by Trevor Tremaine of Hair Police and other musicians to present listeners with an auditory iteration of her self-described absurdist theatre. While I’m somewhat familiar with Moon’s work, her being active in the experimental music scene since the late 90’s, this was my first foray into Auk Theater. Their side is a wild trip consisting of: chimes, spoken word, wind instruments, keys, maracas, percussion, and minimal synth. The minimal, yet effective use of instrumentation really highlights the poetry of Moon’s vocal stylings. Along with Moon, Tremaine adds some of his own singing toward the end of the track over a repetitive percussive beat. The mixture of spoken word and various instruments reminds me of Jane LeCroy at times and early Cerberus Shoal at others. I’m not sure to what degree the recording was planned or improvised, though I’m guessing the latter as the piece sounds very spontaneous and whimsy.  While the end product might be a little schizophrenic to some, pretentious to others, I quite enjoyed the variety of the endeavor. I bet this would be quite a spectacle to see live.

This album was quite a surprise. While I enjoyed the parts on their own, the sum really elevated the project into something special. This is definitely an album that needs to be heard and enjoyed in totality. No need to cherry pick your sides on this one.
Posted by Irene Moon at 11:56 AM No comments: