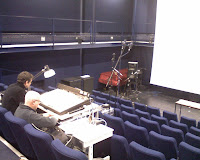 Recorded live at The Rymer Audorium, Music Research Centre, York on 17th December 2010 by Tony Myatt as one lecture in part of the Bee Symphony. An evening that celebrated one of our favorite pollinators..the bees. This lecture discusses the diversity of bees worldwide, concentrating on demonstrating the complexity of the implications of the word "Bee".
Posted by Irene Moon at 9:40 AM No comments:

Email ThisBlogThis!Share to TwitterShare to FacebookShare to Pinterest
Labels: Collection of the Late Howell Bend, performance

Exponential Death was a short play created by Kevin Blechdom, Neill Prewitt and Irene Moon during a two week flurry in February 2010. The play was around an hour long and consisted of video segments, live action and music. Kevin and Irene edited some of the video down over thanksgiving holiday as music videos. Musical credits are on the videos themselves but much of the music was recorded before while Kevin and Irene lived in Tallahassee Florida.


Now That You're Gone by Irene Moon and Kevin Blechdom from kevin blechdom on Vimeo.

Alien on Piano from kevin blechdom on Vimeo.

The Waltz from kevin blechdom on Vimeo.

I Killed Them All from kevin blechdom on Vimeo.

Murder in the Living Room from kevin blechdom on Vimeo.
Posted by Irene Moon at 12:05 PM No comments:

This is a repost from the touch label blog and site. I will be lecturing about bees during the event concerning their lives, habits and beauty of form.

My Queen and I:
An introduction to the bees and their closest relatives.

The Bee Symphony
Celebrating the bee in science and art
Friday 17 December 2010 at 7.30pm
Rymer Auditorium

The Bee Symphony, consisting of recordings of bees by Chris Watson ('The Life of Birds', 'The Life of Mammals', 'Life in the Undergrowth' and 'Life in Cold Blood'), Mike Harding (Touch) and a vocal score by Marcus Davidson (Spire) will be performed live by Chris Watson and five singers from the University of York, conducted by Marcus Davidson. The Symphony was originally commissioned as part of Pestival and performed in the Queen Elizabeth Hall, London. Updated details of the full programme can be seen on the The Bee Symphony microsite
"The theme of the evening is really for people to become immersed in the sounds and rhythms of the insects." Chris Watson
In addition to The Bee Symphony the programme will feature other sound performances and talks by scientists on current research on bees and the current perils that they face, including:
Irene Moon - My Queen and I: An introduction to the bees and their closest relatives, also a special episode for TouchRadio

Buy tickets at www.yorkconcerts.co.uk
The Bee Symphony microsite
www.marcusdavidson.net
www.chriswatson.net
Posted by Irene Moon at 7:22 AM No comments:

The public is welcome. All seminars are held at 11:15am in 3503 (Stevens Room) Thomas Hall unless noted otherwise .
Refreshments are served at 11:00am in the adjoining lobby.

Posted by Irene Moon at 1:14 PM No comments:

Video soundtrack by Darker Florida (Irene Moon and Christopher Cprek)
Some thoughts about the idiot from curator Fanny Gonella:
The word idiot defines a category of people and, consequently, is part of a normative system, which sorts out individuals according to their mental condition. It seems some categories have a hard time finding their place in society, and the idiot, because of his supposedly inappropriate behavior, is kept on the margins of this system.
Although this figure is hardly visible in daily life, it can be encountered easily in literature or films. The context of fiction allows for the complexity of the true idiot’s figure to unfold. He does things out of confusion rather than according to personal interests. This character, being partly dispossessed of himself, offers the possibility to reflect the „landscape“ around him. He functions as a vehicle for other people’s stories. The transparency of his actions, due to his absence of strategy, turns him into a catalyst on the people surrounding him. The idiot brings along a degree zero of intention.
His actions are generated by the position of the others, but he totally ignores their expectations, or what they would normally consider as suitable. Though he acts without following social rules, his behavior does not contain any provocative intention or judging attitude. His genuine thoughts, being expressed without any secondary objectives, offer a clear view on the most complex situations because he does not act according to the potential consequences of what he says or does.
Within our environment, which is overloaded with strategies, the idiot opens unseen perspectives and appears as an existential figure. He develops his own path according to personal beliefs and regardless of decency, which makes his actions incommensurable to everyday logic. His thoughts do not unfold according to prejudices or norms and in this sense, the true idiot sometimes appears as the hidden face of the genius. Reciprocally, knowledge seems to function as a scholarly repetition of norms from the past that have been taken for granted. The idiot’s ignorance suggests an odd form of beauty, without relation to classical harmony but rather to apparently insignificant things and clumsiness.
Posted by Irene Moon at 1:05 PM No comments:

How (or which) large is it?

Yawn. How did I get to the point where one of my foci is actually one of my greatest weaknesses? I have a really loose relationship with the English language and somehow Ive found myself trying to explore its structure. Particularly Adjectives, Adverbs, Indefinite Pronouns, & Prepositions. What exactly is the difference in meaning between these terms where the word large is the root:

All of these terms are used in fairly recent descriptions of new species of wasps. A new published description is required for a new species to be valid. Right now that description, as required by the Zoological Code, must be text. Historically these texts do not adhere to any real rules of language (obviously! Unenlarged is not even a 'real' word according to Websters). A person could be as loose or florid as they desire with their descriptions, creating a lot of variation in word usage in descriptions of species.

Email ThisBlogThis!Share to TwitterShare to FacebookShare to Pinterest
Labels: From the Radio Archives, science, wfmu

Dave Soldier + Irene Moon
Wednesday, September 22nd, 7pm - 8pm
on Do or DIY with People Like Us
An old musician's joke is on the order of "it takes him half an hour to play the Minute Waltz". Today, WFMU's favorite local classical music composer Dave Soldier visits for a live performance of his newest collaboration, with the late Frederic Chopin and living electronic musician Sean Hagerty. Soldier performs the Minute Waltz on the grand piano at Le Poisson Rouge very very slowly, lasting a half hour, while Hagerty stretches each piano note out over time. Chopin may make a surprise appearance.

Irene Moon and a cast of characters from the Auk Theater perform a musical mystery theater about insects. Each character has an insect of choice that is suspect in a recently discovered serial murder. Information about insects is introduced as they try to unravel the "who done it." Not all of the content is logical, but it is absolutely factual. Irene is an entomologist and musician at North Carolina State University whose present research involves the dissection of wasp heads and the representation of the muscles found within the head. She was quoted recently to say, "social bees and wasps are commonly found and easily organized. It's the non-social beasts that fascinate and truly demonstrate how many creative methods there really are to dispose of an unfriendly caterpillar."
Posted by Irene Moon at 6:29 AM No comments:


Erik Satie. Part of the furniture music, Tenture de Cabinet Prefectoral. One of the unsung major influences on modern music.


Joep Straesser. Blossom Songs. I need to get hold of more of these recordings. He has the best titles such as "Sightseeing for string quartet" and "Splendid Isolation for Organ".


Lucas Foss. Fantasy and Fugue. Rhymes with Floss, which I just did for the first time in 2010.


John Cage. Conderto for prepared piano and orchestra. Should of done 4'33. Sneezing also sounds good at 16rmp.
Posted by Irene Moon at 11:07 AM No comments: