How (or which) large is it?

Yawn. How did I get to the point where one of my foci is actually one of my greatest weaknesses? I have a really loose relationship with the English language and somehow Ive found myself trying to explore its structure. Particularly Adjectives, Adverbs, Indefinite Pronouns, & Prepositions. What exactly is the difference in meaning between these terms where the word large is the root:

All of these terms are used in fairly recent descriptions of new species of wasps. A new published description is required for a new species to be valid. Right now that description, as required by the Zoological Code, must be text. Historically these texts do not adhere to any real rules of language (obviously! Unenlarged is not even a 'real' word according to Websters). A person could be as loose or florid as they desire with their descriptions, creating a lot of variation in word usage in descriptions of species. 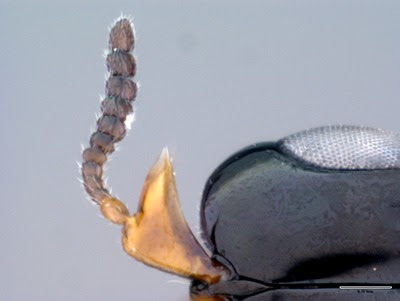 Email ThisBlogThis!Share to TwitterShare to FacebookShare to Pinterest
Labels: From the Radio Archives, science, wfmu