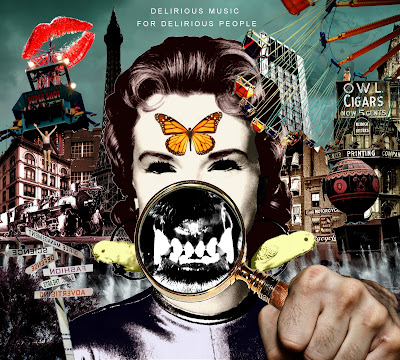 I must say I have enjoyed fully every comp I have been fortunate enough to be included. So much of a good comp is about the person who selects the music, and puts the tracks in a pleasing order. This comp is no exception. It is just FANTASTIC!

Ordering details are on the Delirious Insomniac Blog


==Below is a reposting from the Delirious Insomniac Blog===
The Delirious Insomniac Freeform Radio Show has haunted the airwaves of WLUW into the wee hours of dreary Monday Nights since 2008. Host Arvo Fingers uses his lengthy experience as a sleepless madman to wield surrealistic songs and sounds into a slithering swath for 4 hours a week. Presently, "Delirious Insomniac" is also syndicated on RadioKL.Hr in Croatia, with occasional interviews, virtual guest installations, ghost hosts, and radio art. On September 9th, 2011, Arvo Fingers and WLUW will be celebrating the 4th Anniversary of the Delirious Insomniac Freeform Radio Show as well as the release of the first volume of "Delirious Music For Delirious People", a compilation featuring Jarboe, Controlled Bleeding, Zola Jesus, Boyd Rice and Friends, Gary Wilson, BeNe GeSSeRiT, Big City Orchestra, Hans Grusel's Krankenkabinet, and others.

At this time, less than 150 copies of the digipaks are available and not spoken for. The pro CDRs will stay in print unless someone happens to want to work with me on a double LP.
Posted by Irene Moon at 1:06 PM