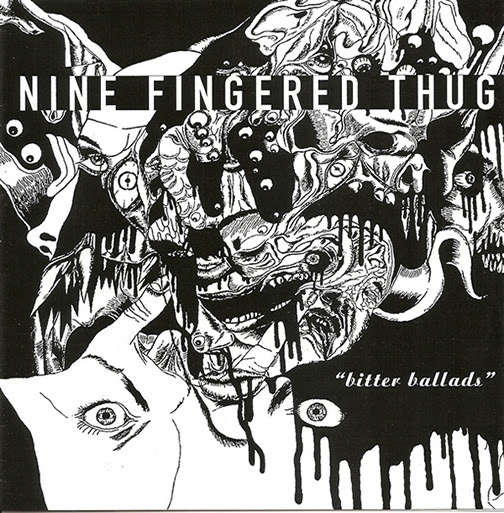 Somehow missed this review when it first came out, but never to late to appreciate it! Here is a reposting:


‘Bitter Ballads’ (HOLLOW BUNNY RECORDS HB005) by Nine Fingered Thug is just totally excellent, from its twisted Matt Minter cover art to every second of its EP-length grooves. While Buffalo Bangers pay explicit homage to various late-1970s New Wave bands with their sound, Nine Fingered Thug are far more eccentric and artistic and while it’s possible to characterise this record as some species of punk-inflected monstrousness, it’s just got so many elements that don’t fit neatly – including the mannered snarly vocals by Samuel M.Z. Mintu and the utterly spooked-out organ work from the great Irene Moon. Come to that, what’s the madcap Irene Moon even doing in a “band”? 2 The two songs here are both hymns to a pair of subversive visual artists, Hans Bellmer and Unica Zürn 3, and the insert includes a photograph of the duo nursing one of their doll constructs. The lyrics, especially those for the ‘Hans’ side, are sympathetic to the dark side of these far-out modernists, while also spinning a nightmarish yarn out of free-form streams of surreal poetry. It’s a genuine attempt to crawl inside the heads of these strange creators. Mintu, credited with “grumbling” as well playing the bass, grunts out these unwelcome visions of ugliness from a deep part of the psyche. There’s also the guitarist Services Lobo and Dabney Scott Craddock IV on drums, and I mention all four players because I can hardly credit the bizarre sound they make together – guitars and keyboards shining dimly among a fug of rather awkward rhythms – rather like a gothic version of Butthole Surfers. Also I enjoy they way they don’t really sit comfortably together as a band; each one plays as though they were making a completely different record from the others. Nothing but praise have I for this slab of grotesque beauty. Probably received some time before June 2011 but was released in 2010.
Posted by Irene Moon at 9:12 AM